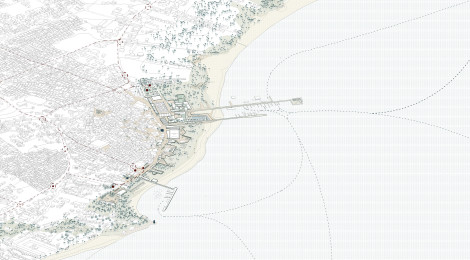 MALINDI 2016 – ‘Malindi waterfont as socio-ecological infrastracture’ is a project awarded by UNHABITAT at IDCK 2016. The design team consisted of researchers from MSLab (Politecnico di Milano) and from Jomo Kenyatta University (Nariobi) and was led by Alessandro Frigerio. The task of designing a new system of public spaces requires an investigation about what can be intended as public good in contemporary cities. In Malindi, uncontrolled urbanization, mainly boosted by the tourism economy and its side-effects, favored dynamics of privatization of the coastline, with a concurrent rapid growth of formal and informal settlements lacking proper infrastructure and collective spaces, as well as a hazardous pressure on the fragile ecosystem of the region. In this situation, the project site sets the challenge to reclaim to the waterfront its role: not limited to its ‘public space’ vocation, but extended to its ‘public good’ dimension. The project aims at designing Malindi waterfront as a socio-ecological infrastructure, able to answer to the environmental challenges related to climate-change and natural hazard and, at the same time, to provide an interactive platform for social inclusivity, economical enhancement and cultural empowerment. The project proposes a general environmental and infrastructural strategy for the Malindi waterfront -from the river estuary to the southward tip of Casuarina beach- and then investigates in detail the design of the area facing Shella and the town center as main metropolitan interface.

Widening the gaze. Looking at a wider scale, it’s possible to frame Malindi in a geographical matrix ordered by the main references set by the Galana river (north), the Mida Creek and Arabuko Sokoke Forest (west) and the Ocean coastline (south-east). The project suggests the definition of a metropolitan growth strategy for the city organized on this reticular framework -differently from the radial model suggested by the ISUD Plan with the aim of avoiding an increase of congestion in Malindi town centre and allowing the definition of a better integrated strategy for the waterfront. Moreover, to control the future of the coastline, it’s urgent to look at a wider scale to the Galana river basin in its full dimension. The sedimentation process, caused by inappropriate uses of the river shores and uncontrolled urbanization upstream, is radically changing the relation between the city and the sea: in less than 20 years Malindi beach widened more than 100 meters. South of Vasco da Gama Pillar, on the contrary, Casuarina beach is undergoing a progressive erosion, jeopardizing the existing tourist facilities and economies. 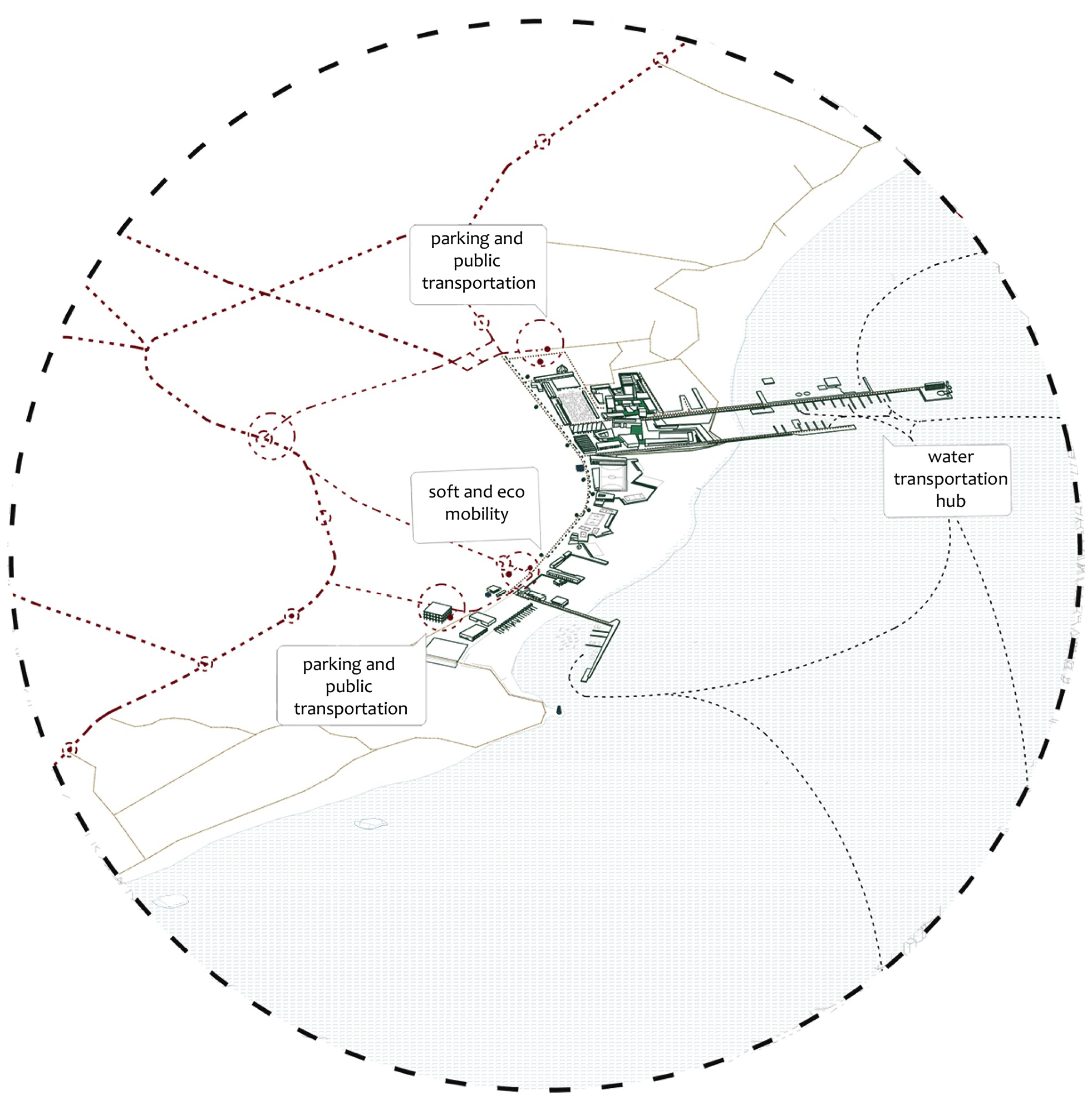 Adapting to landscape metabolism. The waterfront is intended and designed as an eco-armature working for the ecological metabolism of the region, producing an original metropolitan landscape. To protect and expand the fishing and tourism economies on Malindi beach the project proposes to control the sedimentation process through the protection of two mooring and docking areas with deepwater: one obtained by doubling the existing pier in a new harbour system that organizes different economic and leisure activities and the other embracing the present anchoring spot close to the Vasco da Gama reef. To defend Casuarina Beach from erosion a necklace of artificial islets is designed along the coast to foster natural sedimentation processes. Their position and character is linked to an enhanced public accessibility to the beach in selected points. All the landscape elements are designed with attention to climate change previsions. 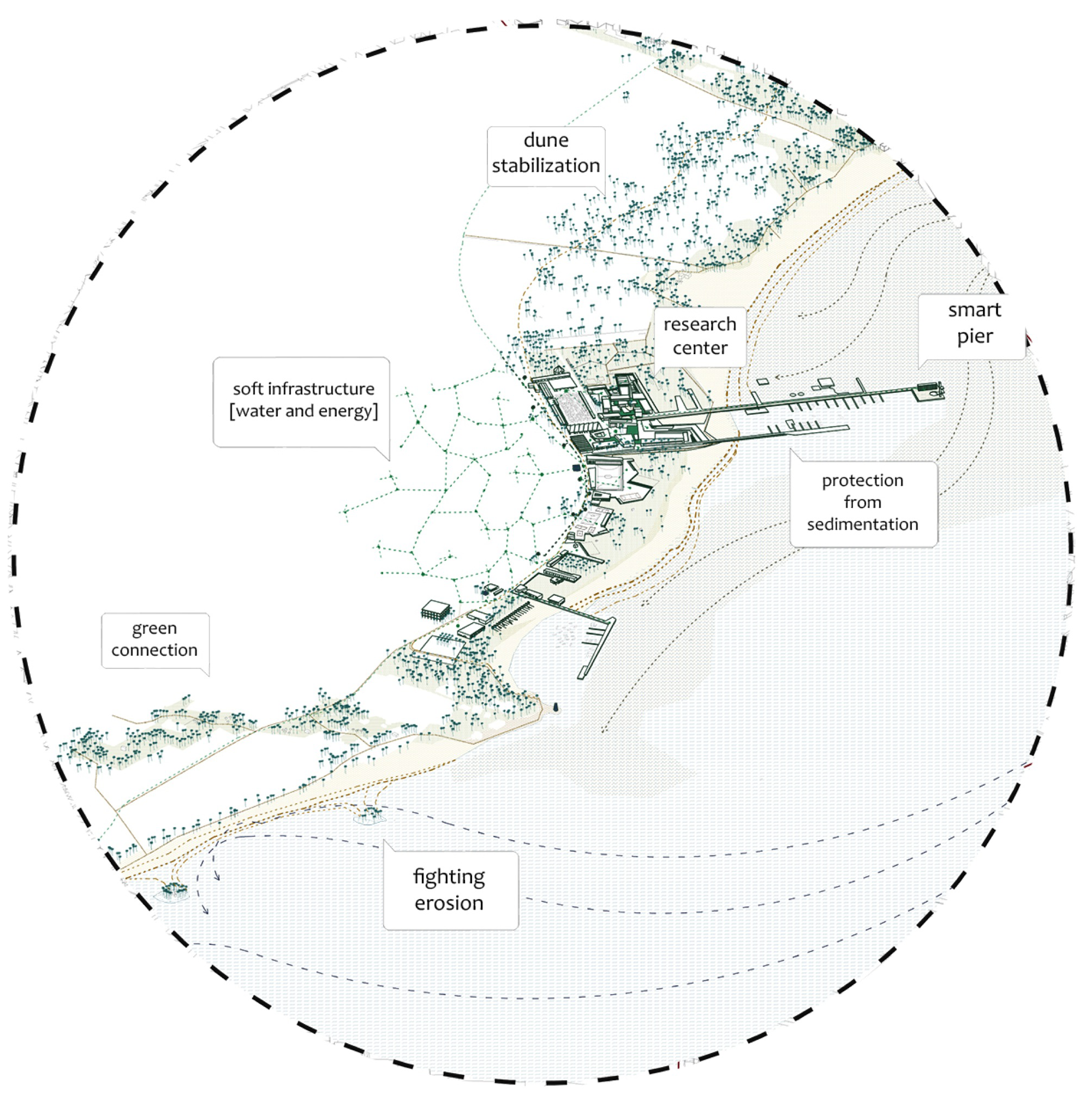 Expanding the public through in/formality hybrid patterns. The design effort aims at providing an urban and architectural platform as ordering device that interpret the local urban pattern and relational logic of open spaces. The coastline contour line is redrawn and built as a lattice that assembles built and void spaces in a system of scenes, opening the city to the beach and the ocean through a porous system. The platform is imagined to be implemented over time and it integrates multiple patterns with various in/formality interactions between spaces and agencies. Ecological and accessibility issues are hybridized with economic interactive cycles (related to fishing, tourism, commerce) and non-economic drivers (heritage, collective events, intangible values and personal stories). The proposed patterns are a sample of a possible multitude that could be developed, even in expected and desirable participative processes with the citizens on site and with the mobilization of already active networks. The presented patterns imagine for the waterfront a wide set of events and activities with various scales and formality gradient: sport, leisure, music, culture, festivals, commerce, fishing, agriculture, tourism, memory, education, co-working, art etc. for a vibrant urban environment. The patterns toolkit is applied even to Shella’s existing open-spaces to foster its integration with the waterfront and to enhance living conditions in the settlement through an improved service provision. 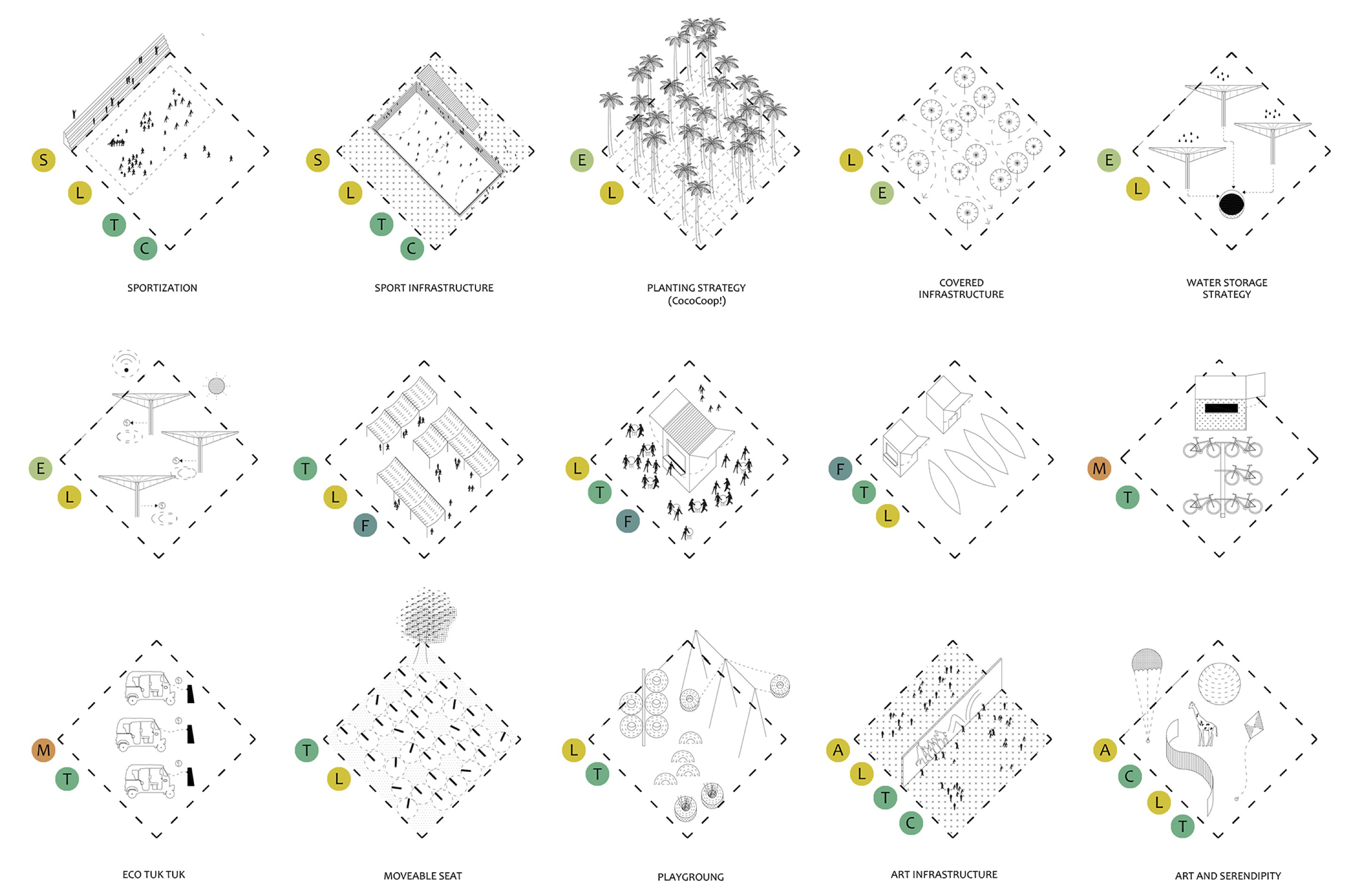 Low-carbon infrastructure. The need to improve public accessibility to the waterfront offering it as public space is combined by the project with a strategy for slow and eco-mobility. Parkings for private cars and public transportation stops are located in specific accessibility nodes, while the whole waterfront is accessible to bicycles and electrical mini-cars (tuk-tuk) managed by local cooperatives. Energy is harvested throughout the waterfront area (Shella included) thanks to special umbrella providing also public lighting and wi-fi connection and in certain case able to harvest rain-water for different uses. Moreover, the double pier is imagined as a testing ground for tidal power production. The whole waterfront system is intended as an infrastructure to experiment and develop low-carbon solutions for the future of Malindi. 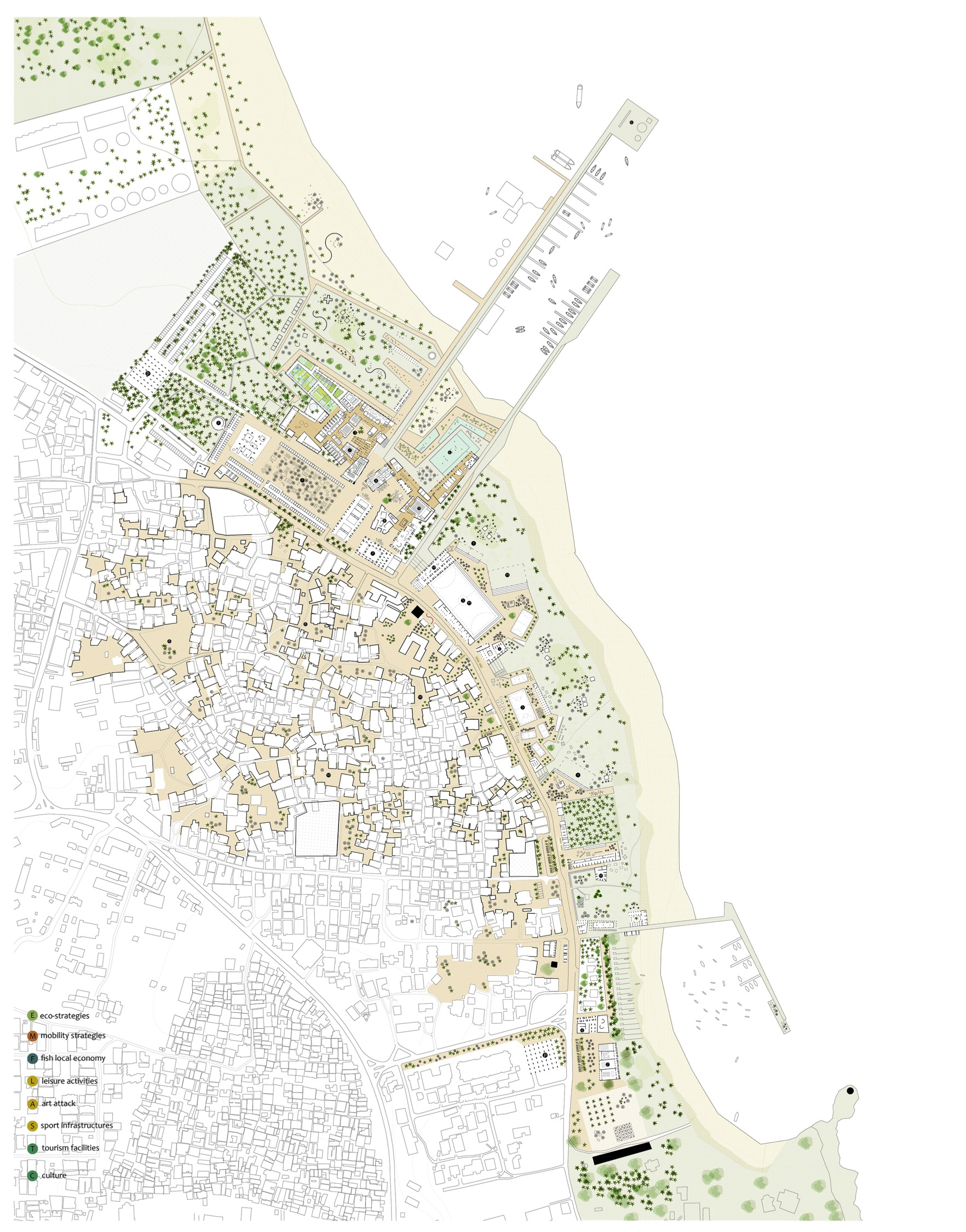 Promoting knowledge economy and cross-cultural short-circuits .The challenges that all the Kenyan coastline is facing in terms of climate change and ocean protection and exploitation and the opportunity opened by a shared vision for a low-carbon future suggest to propose Malindi as preferred location for a research centre devoted to these topics (possibly a branch of the Kenya Marine and Fisheries Research Institute or with other partnerships) merging research, education and dissemination activities. The research centre is designed in connection to the new double pier harbour, within the main metropolitan waterfront node.This is located where the fish and tourist market already are and it’s imagined to become the new symbolic reference for the city. The double piers, the research center, the aquarium and the oceanic center with its spaces for sports and culture, the new fish and crafts markets with food stalls and bars and the marine park for contemporary art aim at bringing in the same place citizens and visitors with different stories to foster unexpected interactions and cross-cultural short-circuits, in the spirit of the cosmopolitan Swahili culture. 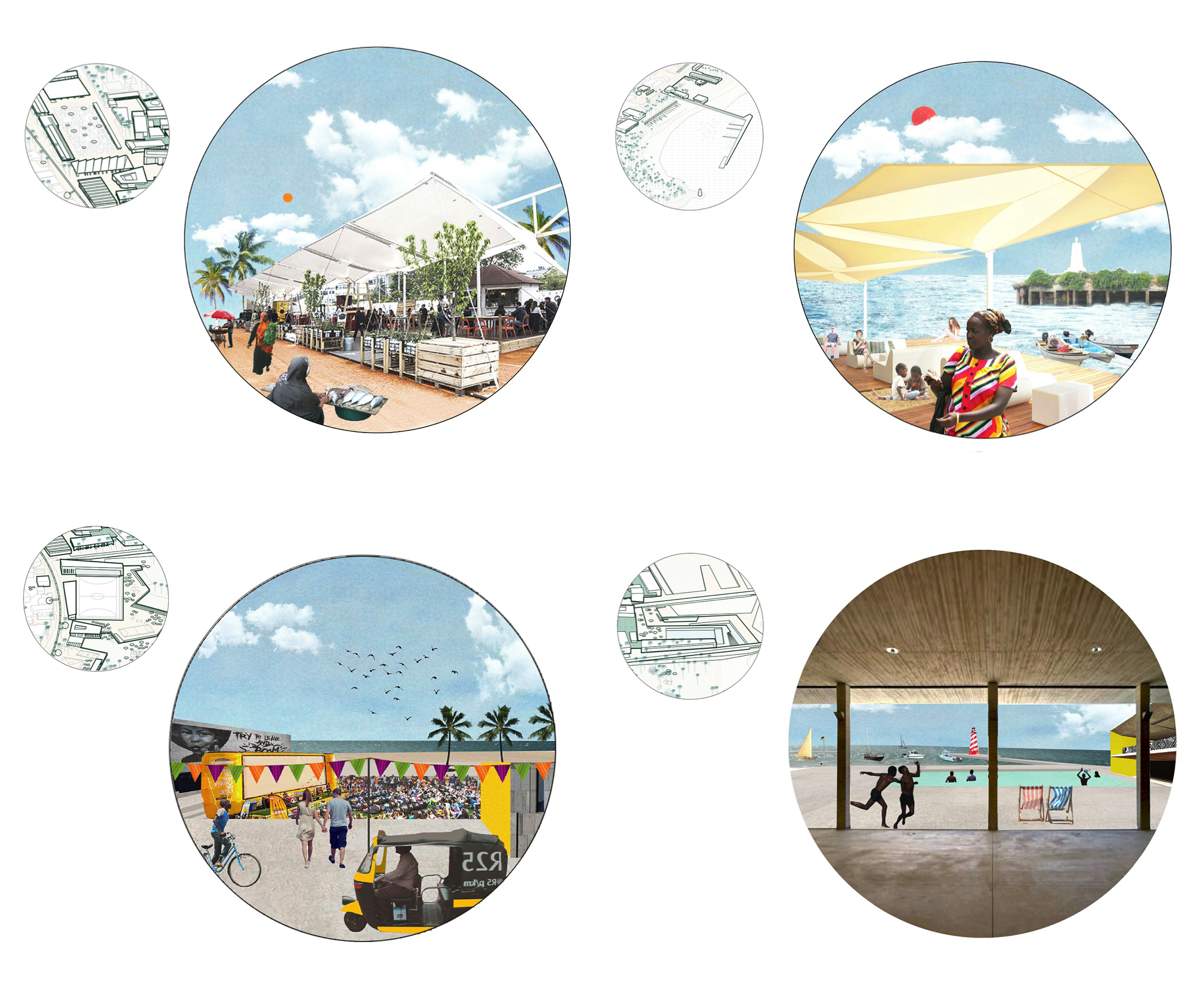 The project as a process, towards a better resilience. Designing the waterfront as a socio-ecological infrastructure means setting the basis for a process to be shared with multiple stakeholders at the different scales; the proposed strategy has to be intended as a vision to move towards aware actions and to integrate them for the sake of a common result. This process of agreement on priorities is the base of the definition of public and it’s in itself a tool to improve the city resilience to social, economical, environmental changes. The project aim at offering a dynamic structure, resilient and robust in assessing its public dimension, durable and temporary at the same time, according to the scale and nature of the urban phenomenon, setting an original narration for contemporary African cities.