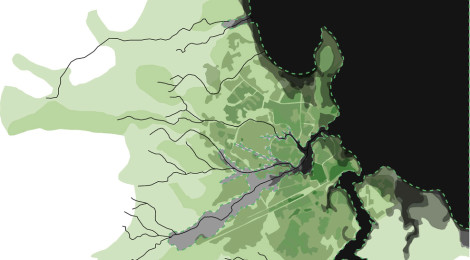 DAR ES SALAAM 2011 – Facing the global challenge of massive urbanization, value and growth can only be fostered through the qualities of identity. A key issue in setting long-term visions is sustainability, which has to be economical, social and energetical and, for this reason, strictly linked with urban as a way to settle in a territory. Density, agglomeration, proximity produce the rich interaction network which contributes to economic growth and cultural improvement. Driving the urban metabolism of a city towards a densification that is controlled in a sustainable way can enforce a vision able to root the global role of a city in its local characters, moving towards a sustainability of identity, setting a smart growth. 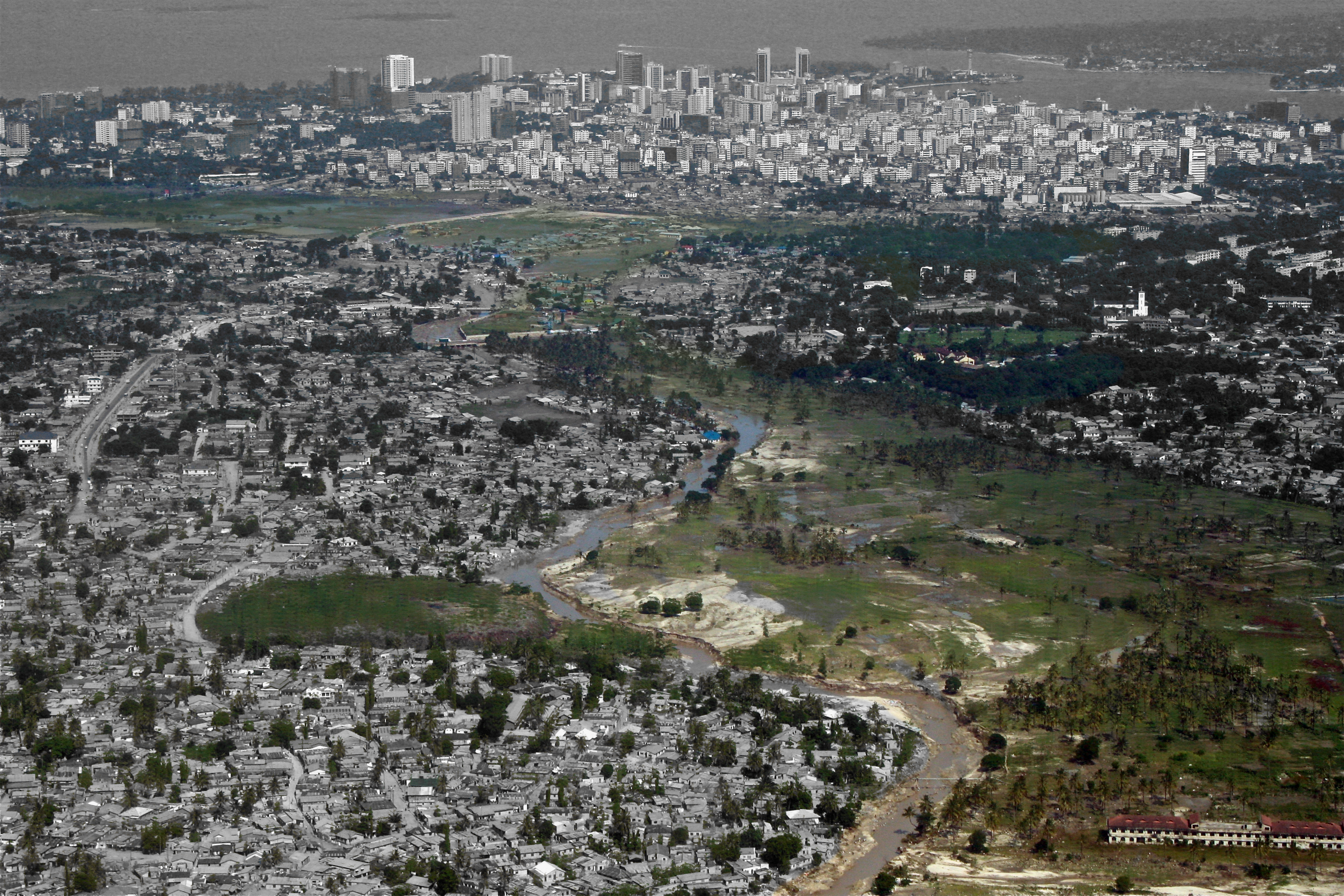 Dar es Salaam (Tanzania) is a urban region with 3 million inhabitants exploding with a growth rate running since more than 10 years around 4-5%/yr and the 80% of the population living in informal settlements. Its geopolitical conditions are making it one of the most important African metropolises, attracting investments from the worldwide system and attentions from the international organizations. Administrative boundaries have been overgrown producing governance conflicts that require compromise, agreements and time. Time is what growth does not respect. Growth is taking place whether the administrative framework is able to manage it adequately or not; a proper flexible strategy is needed. This can be rooted in the urban character of the city, expressed by a threatened rich porosity based on the complex overlapping of formal and informal economical structure. The great challenge is managing the urban development linked to the ongoing infrastructural projects avoiding the overflow of the formal neocolonialist development and balancing it to build a smart welfare city.

Main metropolitan issues:
_Mobility. Traffic congestion and right of movement. Envisioning an integrated system: a fast net that interweaves relations in specialized nodes and an archipelago of local enclaves with inner slow mobility.
_Urban agriculture: feeding growth. 30% of the food consumed in the city is actually produced there. The defense and promotion of local models of urban farming could propose urban scenarios linking living, feeding and social subsidiarity.
_Energy and sustainable infrastructure. Making up for the infrastructural lacks requires the development of low-cost innovative solutions. It’s necessary to set a locally fitted ecological balance for the informal evolving settlements: power, water, waste-management.
_New building typologies: between informal and formal. Managing the relation between formal real estate market and informal settlements dynamics links Identity/cultural aspects to typological/climate/energetic issues under the common framework of sustainability.
_Climate change. Natural hazard and water management The future scenarios about the climate change in terms of agricultural productivity and sea-level rising are uncertain. Their effects have to be taken in consideration focusing on urgent actions about water management. 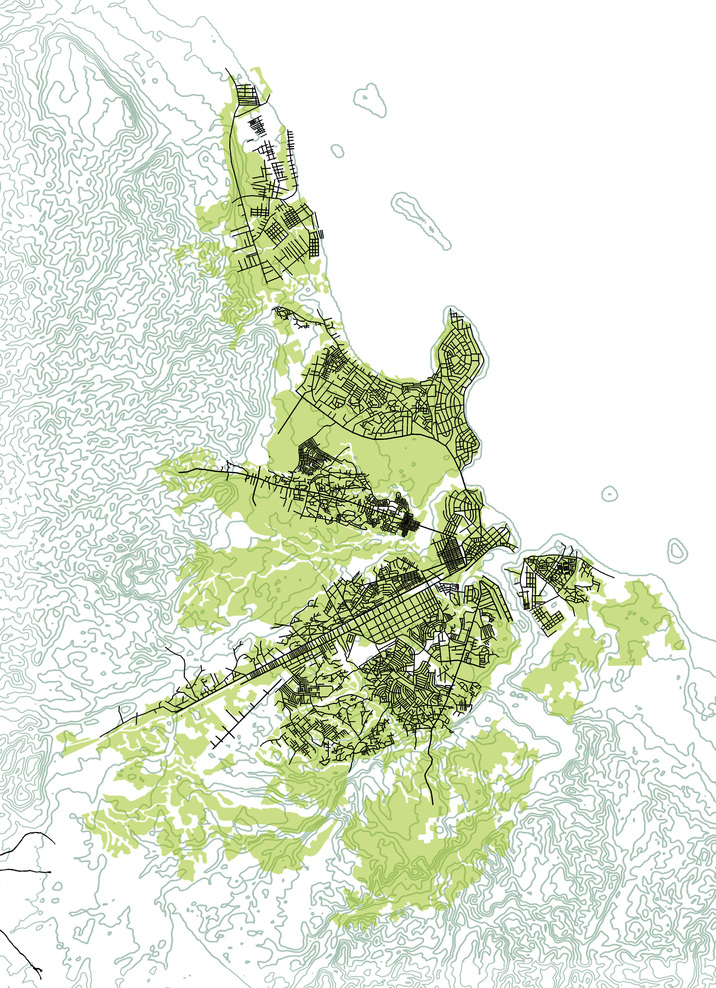 Power of place and need for a Metropolitan Vision. Infrastructure, Landscape and Identity. Contemporary cities can be seen as complex systems built by a network armature, specialized multiscale nodes and an archipelago of urban island with various grains. The infrastructural processes running over a territory are decisive in fixing the characters that build its memorable image and therefore their links with the identity of a place. Acting on the way of inhabiting a place requires a systemic effort set at the right scale. Only thanks to a powerful vision is possible to build consensus and a virtuous interaction between public and private actors to manage the dichotomy local/global. The transition towards formal uses of land and the related infrastructural process has to combine innovative technical solutions, typological innovation, imaginative issues setting a unique and recognizable image of that territory. In Dar es Salaam the geographical endorsement of settlements and the infrastructure network set a multiple layered net with high urban potential; built by:
– ARMATURES: an evolving grey net of technological infrastructure providing fast interconnection and a green net of topographical ecological corridors currently neglected
– NODES: multiscalar entities to be developed as alternative centralities; they activate densification and formalization phenomena to be properly managed
– SPONGY TISSUE: formality gradient patterns for the archipelago settlements preserving and enhancing porosity, managing informal urbanity, welfare equipments, urban farming. 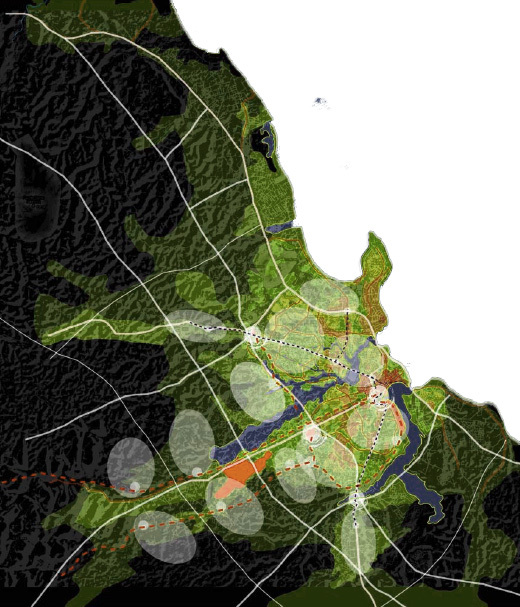 A urban model based on a gradient porosity. The ongoing infrastructural projects in Dar, like the Bus Rapid Transit, are introducing a new scale in the urban structure moving towards an uncontrolled development. The vision for the city has to be rooted on an idea of urban intensity that is effectively net-connected, but also deeply place-specific. The local peculiarity of the green net given by the geography of the city could be the key issue for the urban growth; its management, driving a virtuous balance of the urban ecosystem, could be the specific know-how and branding identity issue for the African green metropolis. The proposed spatial strategy, promoting a double formality gradient pattern, considers the existing rich interactive social and economical system as a matchless resource for the city growth. It has to do with an effective local way of settling provided by an uncommon urban porosity. According to this all the required governance tools have to be fitted, so that people can feel a correspondence between laws and behaviours of land-care, minimizing the conflicts occurring in the formalization process. Virtuous interactions between the public and private sectors have to be fostered to assure an economical balance, making densification paying for welfare. 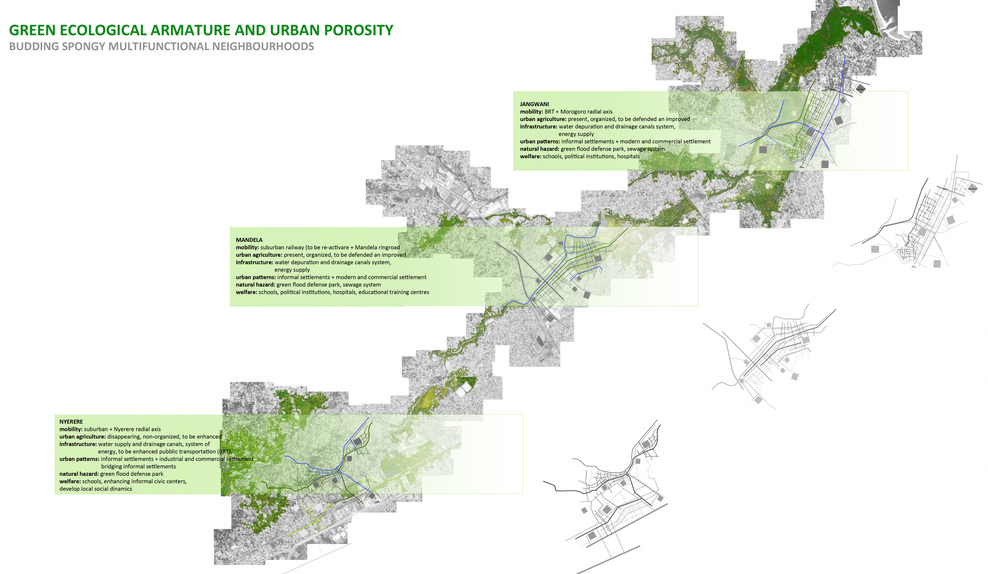 Formality gradient settlement. Stem-cell model: a flexible approach. To withstand the demographic and migratory pressure our strategy propose to act on a sustainable spongy densification to improve infrastructure and welfare endowment in the informal settlements thanks to the new connections provided by the metropolitan armatures. The project proposes a replicable model of urban bud that can behave as flexible stem cell introducing in the urban tissues original regeneration elements to adjust uncontrolled gentrification or decay phenomena. Stem cells work to solve a particular problematic lack in one of the vital functions of the system adapting to various contexts according to their particularities. Integrating existing settlements, the new bud-neighbourhoods act for social integration, welfare provision, infrastructure development, enhancing land-care dynamics. Welfare poles – thanks to their scale and public realm – are the urban adaptative flexible element among different scales, grains, landscapes. They must be designed as open and flexible architectonical systems to match different conditions and various functions. Their role is to witness the presence of public being engine of transformation. 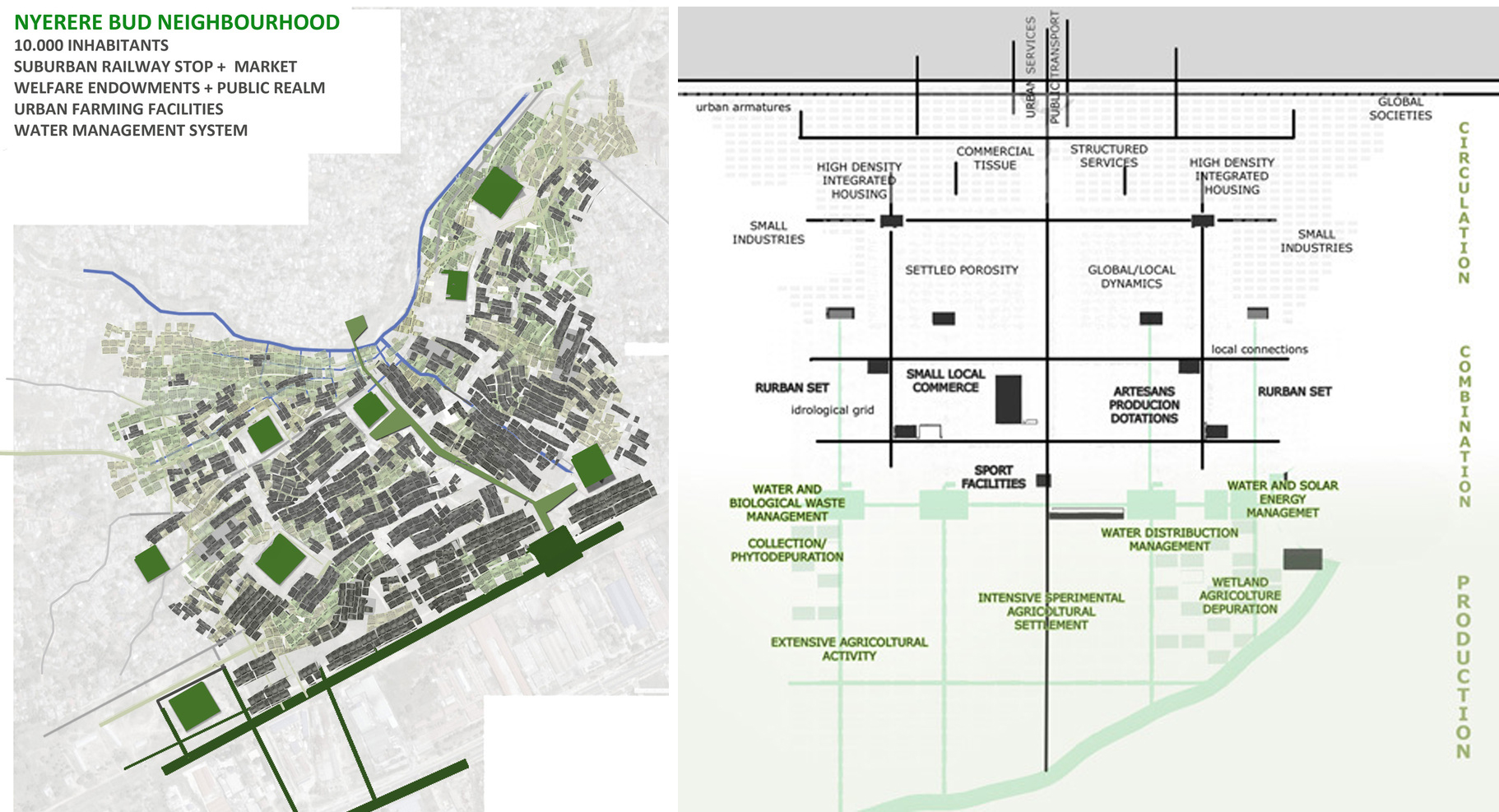 A spongy multifunctional pattern. The project explores the multiscalar link between green and grey armatures and informal settlements facing the mobility, urban farming, formality gradient, water management issues in a synthetic approach. The placing of the new buds depends on the presence of mobility nodes setting a new centrality, able to support the new settlements in terms of economical and social sustainability, but at the same time introducing the need to avoid social inequalities and forced relocations. According to this strategy the new neighbourhood provide a spongy multifunctional tissue. The proposal shows three possible budding operations in different contexts and then concentrate on the Nyerere one. The stem-cell strategy at the local scale is seen as the occasion, at the metropolitan scale, to contribute in building the green ecological axis as new landscape public realm.

Mobility. The various grains of the settlement imply a complex mobility system integrating public and private transportation with informal micro-scale transports and slow mobility, which remain the only way to move along the green armatures and to live the low-grain spongy patterns.
Urban agriculture. The need to provide an effective water management system combines with urban agriculture in the definition of a new landscape for the low-grain zone of the development. The farming activity has an important role for the neighbourhood starting economical and social virtuous cycles.
Sustainable infrastructure. The project sets an almost self-sufficient system through a sustainable cycle linking waste and energy management and food production. Water supply, drainage and depuration are managed by a network of canals, wells and fountains according to low-tech solutions. Energy is provided by solar panels displayed on welfare buildings and great public spaces canopies; microclimate issues have been considered in the urban design to minimize energy consumption.
Building typologies. Traditional typologies have been studied and re-interpreted according to their space relations and flexible structure which consent to expand in time. The density gradient has been designed and controlled thanks to associative design, applying algorithms deducted from the analysis of the cultural and physical context. The elements concurring in setting the residential pattern are the traditional rules and uses, topographical conditions, climate control, water system,.. The resulting urban structure is able to be built in various phases and with the participation of different actors (public, private, self-building).
Natural hazard. The project work on the topographical cut proposing to solve the sea-level rising, floods, and farming-ground drying through its integrated water management system and specific urban design solutions.